As a teenager growing up in a small-town in the foothills of Northern California, I remember being shocked watching the beating of Rodney King. I was even more astonished when those white policemen who had administered the beating were found not guilty, leading to riots and mass unrest.  When I was an undergraduate student I was depressed and saddened to learn about how there had been cycles of similar events throughout our nation’s history.

The writing of James Baldwin was particularly impactful for me.  It was through his writing that I started to develop some understanding of how long standing and pervasive racism was in our country.  Baldwin was a pragmatist who also expressed optimism in the face of challenges.  He believed that we could create a better future together.

I went into teaching as a young man full of hope that through education we could work together to create a more respectful, inclusive, and humane society that would be free of inequality and injustice.  Teaching elementary school at a high-poverty school in LAUSD where almost all of the students were non-white was a humbling, eye-opening experience.  The range of inequalities in our society was much wider than I had ever imagined.

Now, after more than two decades of working in education, I am still a believer in the power of learning as a form of liberation and as Mandela said, it is “the most powerful weapon” to change the world.

Now here we are watching the trial of a white policeman who killed George Floyd.

Now here we are after a hate-inspired shooting in Atlanta killed eight Asians.

Now here we are at a time when a global health pandemic has exaggerated pre-existing inequalities.  According to the Centers for Disease Control and Prevention, Blacks and Latinos are three times more likely to be hospitalized for COVID-19 than white Americans and twice as likely to die from it.

Reality is painful for any who have a sense of empathy and literally life-threatening for many of our fellow human beings.

The writers of the Declaration of Independence famously stated that “we hold these truths to be self-evident, that all men are created equal.”  That was almost 250 years ago.

Martin Luther King’s “I Have A Dream” speech was more than 50 years ago.

If there has been progress, it has been too slow.

I still hold onto my optimism that we can be more inclusive, more respectful of the benefits of diversity, and that we can together build a better society that improves the lives of individuals, communities, and society.  I believe that we are deeply interconnected and I still believe in the transformational power of education.

As an optimist, we must also be realistic and recognize that there is no doubt that systemic inequalities exist in our society.  These inequalities are evident in every field.  Just as we see massive inequalities in physical health during the pandemic, we have seen wide gaps in academic achievement, graduation rates, and other educational outcomes.  After multiple waves of reform and in spite of the best efforts of educators, we can safely say that making incremental changes to our present model of “school” is not likely to result in the dramatic transformation that is needed to resolve these inequities.

Kendi states that “Becoming antiracist requires every individual to choose every day to think, act and advocate for equality, which will require changing systems and policies that may have gone unexamined for a long time.”

So we must ask why our educational system has not achieved the promise of empowering all learners.  This leads us to reflect on the fact that it was designed at the dawn of the industrial age, inspired by Prussian efficiencies and modeled after assembly-line approaches.  The dominant mode of organization is hierarchical, didactic, and directive with a focus on knowledge attainment and compliance.  There is an inherent power dynamic in the centralization of authority.  In the words of the students from Vista Unified who provided input to me through multiple forums, this results in an experience where education “happens to” the students through a largely passive series of disconnected courses.  The most common word used by students to describe their school experience in the first round of forums was “irrelevant.”

It should not be a surprise that a factory model of standardized education has not been responsive to the dynamic and unique needs of non-standardized individuals.  A system designed for institutional efficiency was never intended to be adaptive to diverse humans.

I have learned that critique of the status quo only gets us so far.  We must reimagine what is possible.  If we want a better future together, we must create it together.  I believe that a new paradigm, a learner-centered paradigm, is required if we are to achieve our aspirations of reducing systemic inequalities in education and beyond.  Learner-centered education begins with a respect for the jagged intersectionality of our unique identities.  Instead of beginning with an orientation to institutional efficiency, learner-centered education empowers each and every person to develop their unique identity through exercising agency in pursuit of real-world problem-solving.  It transcends the knowledge-focus of the industrial era and recognizes that we must orient to the cultivation of contextualized knowledge, habits and skills. 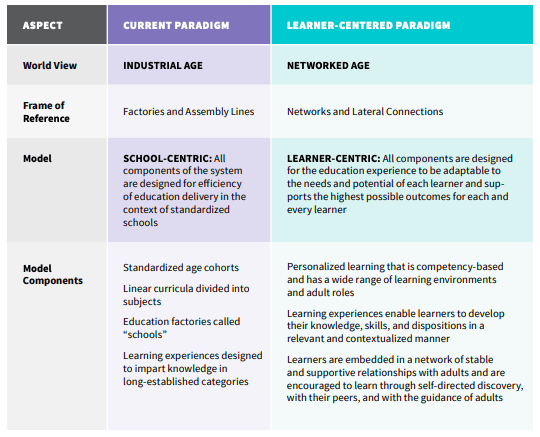 In a learner-centered paradigm, we embrace networks that are co-constructed, co-designed, and co-implemented with and for students in supportive communities.  As we’ve researched learner-centered outcome frameworks, I have come to believe that we must develop agency and expertise, collaboration, and real-world problem solving skills for all learners.  Imagine a world where every person can confidently navigate through life with the capabilities to do everything in this graphic?

In Learner-Centered Leadership, I wrote:

By embracing and celebrating the unique strengths of every learner, it is my hope that we can begin to see all forms of difference, including cultural and racial diversity, as the assets they truly are. Being learner-centered, therefore, is a direct challenge to inequality in all forms. In the same ways that we want schools to be learner-centered, society should be human-centered. At its essence, learner-centered education and human-centered societal mindsets embrace the notion that equity requires us to see and know one another as real people and then to design improvements as a community.

I am learning that the work of being actively anti-racist involves my own introspection and self-development, work in my organization, and actions in the world.  I am committed to continuing to work on myself and within my organization.  In addition, we simply cannot continue to perpetuate existing inequalities through the institutional model of schooling.  As it is often said, “every system is perfectly designed to get the results it gets.”

We must redesign and reimagine our systems within a learner-centered paradigm so that we can empower all students to know themselves, see themselves as full of possibilities, and shine as changemakers.  To do so, we must see differences not as defects, but as the assets that they truly are.  While it begins by looking in the mirror, the pursuit of an anti-racist, inclusive and just society requires us to shift to a learner-centered paradigm.

While there are many entry points in the shift to learner-centered education, here are several key shifts to consider.

If we are committed being anti-racist and taking action in the world, perpetuating the industrial model of schooling is not an option. While learner-centered education is a growing movement, we need it to be the norm if we want every learner to feel valued and connected as a contributor in an inclusive community.  Each of us, including myself, must do our part to create and scale a new ecosystem of learner-centered education.

Being learner-centered is a radical and potentially revolutionary approach that holds the potential to eradicate inequality in all forms, including classism, racism, ageism, and sexism. And it begins by simply seeing one another.

Check out the book Learner-Centered Leadership: A Blueprint for Transformational Change in learning Communities for more insights, reflections, and suggestions.